Blacks: This is Why You Need to Vote for Trump This Time!

Honestly, I am seriously wondering why majority of blacks in America keep voting for Democrats every presidential election cycle. The thought alone baffles me, if you take into consideration everything I know about the Democrats party in America. 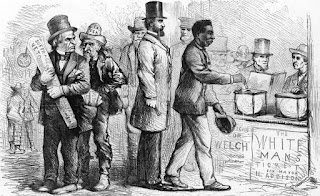 This is a party that didn't want to free the slaves and subsequently pushed America into it's first civil war under a Republican president, Abraham Lincoln. Sadly, when they couldn't win the war, they killed Lincoln and subsequently installed his VP, who, surprisingly, was a Democrat; Lincoln had chosen a Democrat as VP to show inclusion of both parties in his government. It turned out the Democrat VP was still a Democrat at heart.

As president, he tried putting things in place that could potentially enslave blacks once more, like reinstating Confederates in the Union without protection for the newly freed slaves. Republicans in Congress were radical about their support for the full emancipation of the slaves, thus, they fought hard and went ahead to pass the "Civil Rights Act of 1866, which established (blacks) as American citizens and forbade discrimination against them." Democrats weren't happy about this. Later, in 1868, Andrew Johnson became the first president to be impeached by a Republican majority in Congress and narrowly escaped removal by the whiskers in the senate.

This Democrats hatred for black people continued down the line. Even though amendments were made to the Constitution (14th and 15th) to make blacks bonafide citizens eligible to vote in elections, these did not become very effective until nearly a century later. It was majorly Democrats who kept kicking against it until John F Kennedy was elected as president. He was a rare Democrat who proposed the passage of the second civil rights act. Democrats in his party vehemently opposed this move and refused to let it pass in Congress in which they were majority. When Kennedy was assassinated, possibly as a result of this, his successor pledged to pursue the passage of this into law to honor Kennedy. Finally, after a series of filibusters and hardwall by mostly Democrats, the civil rights act was passed at a compromise by both chambers of Congress. More than 70% of nay votes from both chambers were  Democrats. Only one republican voted against it in the Senate, for instance.

When Democrats realized that fighting against blacks could not help them politically any longer, they decided to co-opt the fact it was both a Democrat administration and Democrats controlled Congress that passed the second civil rights act. They started selling the lie that Republicans are the ones who are racists. They have used this lie to buy black people votes over the years, until this year. But a lot of people in the community are waking up to these lies. They're beginning to ask questions.

What has Democrats done for black people in America since after they reluctantly passed the civil rights act of the 60s? They keep claiming that the system is rigged against blacks, but they're the ones who have been running the system, as they're the ones blacks keep voting in to represent them. If there's systemic racism in place, why have they not done anything about it? Why do they have to keep using the same mantra to seek for black votes every election cycle?

Look at Democrats run black neighborhoods. What do they all have in common? Blacks are impoverished and neglected unless there's an election ongoing. Why can't these black people see they have been lied to by the Democrats every year? It's utterly baffling to me. But, I'm glad the Blexit movement has awaken a lot of people to the reality. Howbeit, there are still those that still needs enlightening.

If you are one such ardent Democrats lover, you need to ask yourself exactly why you keep having to vote for Democrats. Because they gave you an incompetent first black president, have black for that matter? Or what?

These year's Democrat presidential nominee is not only senile and incapable of being a president, he's also been an actual racist who had enacted an actual racist law that incarcerated black people, whom he preferred to as "super predators". He thinks black kids are all poor kids and he recently said blacks who refuse to vote for him are not blacks. Isn't this enough to reveal who he truly is, and what Democrats truly are?

These election is the most important in the history of your country. Don't make the mistake of being enticed by Democrats constant promise of eradicating an inexistent racial inequality in "the system". Yes, there's racial inequality in America, but it is not a systemic issue. It is one that has to do with interaction among people in your communities seeing each other as one, irrespective of the color of their skin. The constant segregation of blacks from whites by the Democrats has made equality difficult to achieve. This is exactly the way they want it to remain because that is the only tool they can use to rally your votes.

It took Donald Trump to dismantle over a decade long Democrat law that incarcerated blacks over the years. It's called the First Steps Act. His opponents in the election, Biden and Harris, both utilized this dismantled law to oppress black people. Biden passed it into law and Harris enforced it as a US attorney. They're both complicit in the systemic racism if it exists at all.

As you go out to vote on Tuesday, remember that the Democrats have not changed one bit. They've only changed their tactics. Don't be deceived by their lies. They are still black face Democrats who hates blacks who run free.