Blacks Who Don't Vote for Joe Biden will be Turned White!

Pius Arinze Has Sunday, May 24, 2020
Yeah, that's pretty similar to what he said about blacks who choose his opponent in the presidential race of which elections are slated to hold this November: 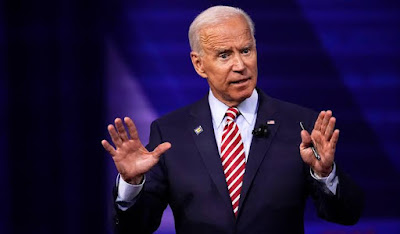 "Well I tell you what, if you have a problem figuring out whether you're for me or Trump, then you ain't black." - Joe Biden, 2020.


There you have it. And lots of crazy internet folks on the left are claiming Joe is right in context. Somehow, I agree. You know why? Because Joe's demented mind now simply believes all blacks are slaves to the Democrats party in USA. Hence, if you don't vote for Joe's ass, you "ain't black", but white.

Ok, let's get serious and put it this way: blacks in USA are not supposed to think for themselves. The Democrats (who have done zero to actually help black people, aside giving them a bought over half caste as president) own the black votes. They have for many years now. But not when they fought against Lincoln freeing the slaves years ago!

If you vote for Donald Trump, I'm sure you are White. All blacks are programmed to vote for the Democrat in the race: Demented Joe.

Some are saying he just gaffed. I couldn't control my laughter! What the heck? That's one of his gaffes? I'm not a dementia professional or whatever way it's put, but I'm certain demented people can only say what represents their current state of mind, which is who they are in reality. There's no calculation, so they can't lie easily except they are in full control of their intent, which is occasional, and can never be gaffed about.

What Joe said is blatant racism. It completely reveals what Joe Biden thinks about the black race in America. Going back in time can throw more light on this.

Joe is on record bragging about enacting laws that could imprison mostly black people for insignificant offences. Many have been incarcerated as a result of the bill. Luckily, Trump came and brought the first step act hope.

Joe is on record saying blacks ain't needed in high positions. Joe's on record classifying all black kids as poor kids and white kids as wealthy ones. And the guy is damn demented?

Tell me, what has Joe Biden done for the black people in his 40 years of politics? Trump's only been in political office since 2017 as president. He's done a lot of things for black people. Lots.

However it may hurt you, my dear, if you are black and you choose someone other than Joe Biden, prepare to lose your blackness and begin enjoying that long taunted white privileges. You can't be black anymore.

This is appalling. You can't make this stuff up! That's who Joe Biden is: A Racist. His statement is a clear evidence of his racism. And I bet he doesn't care that you disagree. You can only be black if you vote for Joe.

It's time to wake up folks.