5 Reasons You Should Consider Voting for Trump in 2020.

I've been following the Trump movement since 2015 after a friend here showed me a video of a republican debate. Before the 2016 election, the support I saw for Trump on social media and by watching his tireless campaign rallies was huge.
However, whenever I turned on the cable news networks back then, the news report all seemed to suggest he was going to lose. Surprisingly, to the naysayers, he didn't.

SHOP FOR HALLOWEEN ON AMAZON 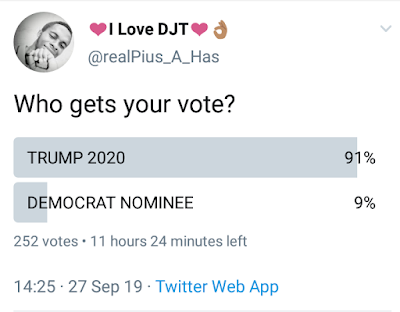 He won massively and resoundingly. Because the people saw a mighty potential in him that can make America great and went for him.
I'm glad to tell you that I'm still following everything happening today. Trump is doing exactly what he said he'll do. For that, the corrupt system despises him.
Gladly, the movement have grown since 2016. What I'm seeing in social media and Trump rallies this year is bigger than what I saw back in 2016. Trump will win reelection in 2020!
Here are the top 5 reasons in my list to consider voting and working for his reelection:

Listen To The Best Love Stories For Free

He Keeps His Promises


Can you remember anything President Trump said he'll do before 2016 elections which he has not done or attempted doing? Even with the numerous attacks he's had to fight off all the time, from the Democrats and the Fakenews media, he keeps pursuing his agenda. This is something politicians don't do.


He Listens to the People
There have been some policy issues Trump came up with supposed solutions for in his presidency since taking office which he had to abandon or change track on because the people who voted for him are either skeptical about it or oppose it. He's had to explain the need for some other stances he had to adopt where the people disagreed on. He's listening to you, America! Which politician does that?

He's Fighting for America's Future
President Trump cares more about the survival of the American republic than anyone in America I have listened to or read about. He's fighting to keep America ahead in the world for the good of her citizens. He's not even interested in being popular in the world like Obama. America first may not be America only, but it's a mantra that keeps a nation from going into extinct by its own doings.

He's Draining the Swamp
The recent Biden Scandal which the Democrats and their media counterparts tried pinning on Trump is a huge eye opener to what he does in his quest to drain the swamp. You ever wonder why every establishment folk seem to hate him? You ever wonder why they've been wanting to impeach him from the day he was elected? It's simply because he's turned his back on the corrupt elites controlling American politics. He's Fighting for the good of the American people. He's fighting to preserve the American Constitution!

He is not owned by Globalists
Trump's a billionaire who's going to end up poorer than he was before taking office. He's not in it for the money. He does not owe anyone allegiance except the American people. He's not owned by globalists. He answers to no one, but the voters. He's not a pay for play politician like all those attorneys becoming millionaires after serving in an elected position. He's clean.

If you need anymore reason, just look around you. Sometimes, you just have to turn off the cable news networks. Isn't your life better off now than before?

YOU MIGHT WANT TO DO SOME HALLOWEEN SHOPPING ON AMAZON RIGHT NOW!

Please, make sure to reelect Donald Trump in 2020.