Pius Arinze Has Wednesday, July 17, 2019
No one denies the existence of race related discrimination in many parts of the world today. However, the definition provided for the particular term used in referencing this issue, "Racism",  is myopic at best, whether in its application or text. It provides an avenue that allows a set of the racial divide to discriminate against others without being questioned. It does this by limiting what is considered racist to be that discrimination coming from a supposedly superior race over the inferior ones. 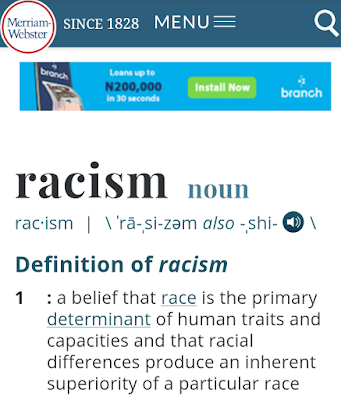 This limitation is not just myopic but is also racist itself. No race, no matter what happened in times past, should be considered inferior or superior to others. No race is in the minority in our world today, and none should be considered as being minor in comparison to others. Doing so only perpetuates discrimination, and can lead to the marginalization of any set of people just because of their skin color. It results in some unwarranted privilege and protection for a particular set of people, which hinders healthy discussion in the society. A good example is what's happening in the Western worlds today.

Take America for instance, a clown show of retribution was just recently passed in US House which sort of serves as a rebuke to  the president over a set of tweets that had no racist content in it. This is equivalent to telling the leader of the Free world he has no right to disagree nor call out some political opponents merely because they are people with different skin color than him. This is a man who is known to freely fight back against Political opponents who question America under his watch. The sad thing here being that the same people who are mischaracterizing his tweets are unwilling to look at the whole tweet in context. Instead, they are keen to push their narrative for political reasons.

For those who care to pay attention, the president wasn't and isn't racist as his opponents wants everyone to accept. In actual sense, it's racist to assume he can not exercise his free speech rights because of his skin color. Racism, therefore, is any form of discrimination, treatment or segregation of people based solely on the color of their skin. It can happen against any race. It can be perpetrated by any race. In America, it's been meted against blacks, whites (eyes rolling?) and people of other races.

This is heartbreaking! The meaning of racism has been lost in the wind of minority protection that have empowered these people to be proud racists themselves without repercussions!

If America does not change its perception of this today, her next generations will suffer its consequences. God bless you.